"Dave" sent me a photo of his friend's tattoo about two weeks ago with:

A couple of days ago a friend of mine got a tattoo, and upon asking him what it meant, he told me it was a "secret". I know my friend isn't the brightest of stars and I suspect that he had help translating it after he got tattooed and found out it meant "I love sucking ass" or something similar, so I would REALLY love to know what it really means, and since he can barely speak English, let alone Japanese. 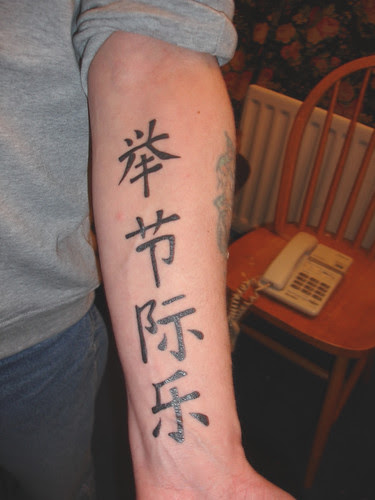 At first I thought 举节际乐 (traditional format: 擧節際樂) was some kind of idiom. When my own research turned up fruitless, I then forward it to Alan and he replied with:

What does this jumble supposedly mean? I have no idea. This means nothing in Japanese. Except for perhaps 举 would be recognizable as a variant of 拳.

Even looking at the traditional forms, the characters would be recognized but I don't think that any Japanese person would discern any meaning other than the meanings of the individual characters.

What is this supposed to be? I wonder if the owner of the tattoo simply picked the characters at random.

The whole thing could be backwards (or actually inverted bottom to top), so it should really be read 乐际节举.

This is all I can guess now, but it is really strange that the tattoo would be written inverted even though the characters themselves appear to be fine. Maybe the tattooist was working from a computer-generated font that was cut apart and re-stacked incorrectly like the case of Kimberly.

I tend to agree with Alan and this could be just another case of gibberish been tattooed on one's body. It has even happened to CIA's "Kryptos".

Several days ago, Mariah Miller contacted me seeking help for her Master's thesis.

I am looking for individuals with Chinese character tattoos to fill out a short questionnaire for my master's thesis.

I am a student in the Global Studies Programme run jointly by the German University of Freiburg, the South African University of Kwa-Zulu Natal and the Indian Jawaharlal Nehru University. This is an interdisciplinary program focused on the study of globalization in either the political, governmental or cultural aspects.

I am writing my MA thesis on Chinese character tattoos. For my study, I need as many respondents from as many locations across the world as possible. I would be very grateful to anyone willing to fill out the questionnaire and/or pass the word about my study on to their friends.


If you are willing to participate, please complete Ms. Miller's questionnaire posted above and email it to her at the following address:

OK, so I was looking over the kanji tattoos at Bmezine.com again (yes, it is getting addictive), and I found this picture:

The first thing I thought of when I saw all of these guys with the character 昆 on their shoulders was the combination 昆虫, but I couldn’t for the life of me think of why they would want to tattoo themselves with the word for bug or insect.

Then I thought it might be a Chinese thing, so I looked it up in a Chinese dictionary. I think that 昆仲 or 昆季 can mean “brothers.” Is that the first association a Chinese person would make upon seeing the character 昆? Or would you think of 昆虫 also? Even if the meaning of “brother” is right, why would they use only 昆 which means only “elder brother”?

If they really wanted to do a guy thing and tattoo themselves with the Chinese or Japanese for “brothers” wouldn’t 兄弟 be a better choice?

Anyway, I know you must be busy, but I still appreciate the work you put into Hanzismatter.com.


昆 may have once meant 'brother.' However, just like any other language, its meaning has changed with time. Similar to the word 'gay' no longer exclusively meaning 'happy' in modern day English.
Posted by tian at 12:20 PM 12 comments:

In Jan. 31 issue of La Presse, there was an article briefly mentioned Hanzi Smatter:

Since I do not understand French, reader Dimitri translated the paragraph for me:

"There is worst. Tian, a young Chinese blogger, now living in Arizona is having fun documenting the most ridiculous tattoos. And there is no lack of it. On his site, on which he has been working for two years, he collected 400 gems. Amongst them, the tattoo of a young female American: "Crazy diarrhea". Ouch !"