What is the next trend after Feng Shui garbs and Zen tabletop sand gardens?

Reader Anonymous sent me this throw pillow for sale in Cafepress by Healing Threads.

The product description says: “Hon Sha Ze Sho Nen heals across space and time working on problems in past lives and across great distances.”

Hon Sha Ze Sho Nen, or 本者是正念, literally means “I have correct sense” or “I have true belief”.

Too bad, I did not find any pillow that says “I am a gullible tool”. At least they are not Quixtar, or are they?

Update: March 31, 2006 - I read something about Reiki from Skeptic's Dictionary:

"Reiki is very popular among New Age spiritualists, who are very fond of 'attunements,' 'harmonies,' and 'balances.' Reiki apprentice healers used to pay up to $10,000 to their masters to become masters themselves.

The price has come down and, according to one correspondent, 'prices for first level are around $100, second level $150-300 and master around $600-800.' The process involves going through several levels of attunement.

One must learn which symbols to use, when to call up the universal life force, how to heal an emotional or spiritual illness, and how to heal someone who isn't present."

Why does this sound so familiar to another trend called "Life Coaching"? At least the paying large sum of money part.

Andy from UK has purchased this tie from Burton sometime ago when he needed one. While the tie is often covered by the jacket, Andy has always assumed the Chinese characters had something to do with tiger.

After seeing my site, he started to have doubts about his original assumption and wanted to know just exactly what Burton is putting on their products.

I personally have never seen tiger been described in such way 夫武田元春訣前; but what I can tell is four out of the seven characters are written incorrectly.

My guess is these are random characters chosen to be used as marketing tools.

About a week ago, I got an email from an Italian named Giacomo Polonijo asking for translation help. He wanted to get a tattoo of three words “Consciousness, Coherence, Balance” and hoping I could verify the translation for him.

Two days later, he sent me the design he is planning to use.

I was horrified by the poor penmanship as well as the missing partials in the characters; I informed him that whoever designed his tattoo probably only had primary school education in Chinese or Japanese.

To illustrate my point, I attached the correct characters (written in red) back to him for comparison.

In an immediate follow-up email, I strongly urge him not to get the characters tattooed.

Unfortunately, I have the feeling that he is too stubborn to take my advice seriously.

From Brazil, reader Joao (a long time Japanese student) sent in a photo of this young man proudly displaying his cool tattoo at a party.

Besides the fact the characters are poorly written, the true meaning of the tattoo may not be as what the owner intended.

Perhaps this is some kind of viral ad campaign by makers of gas-relief medications?

Joel Martinsen of Danwei.org has sent me this scan from a newspaper in Beijing.

Although Hanzi Smatter mostly focuses on the misuse of Chinese characters in Western culture, I had to comment about this. Especially the glaring error in the story has embarrassed Beijing City’s Traffic Bureau.

The painted 人行步道 (pedestrian crossing) has an extra dot in 步.

I should also point out that in Japanese, 步 does indeed include the extra dot.

This tattoo is Chinese transliteration of “Uriah Wilson” by Isaac Villarreal in Lytle, Texas.

I personally have never met anyone that is named “Uriah”, only “Uria”, therefore I don’t know if the three characters on the left side are the correct or acceptable translation.

But I have met plenty of “Wilson”, and that second character in 威尔逊 is definitely incorrect. It has been rotated 90 degrees clockwise.

Reader Allison sent me this photo of her fellow classmate’s tattoo.

The young lady has been bragging about it and claims her “Asian characters” tattoo means “rock on, girl!”

Well, it is complete gibberish.

Ironically, the three characters do to some extent resemble 死枯石, “decaying stone/rock”. (Perhaps a little jab at the Rolling Stones?)

Since the term “rock on” is American/English slang, there is no accurate translation for it in Chinese or Japanese.

If you know a good equivalent of “rock on” in Chinese or Japanese, please feel free to comment or email me.

Patrick emailed me this fantastic find from Simplythebest.net.
It is a free downloadable “Japanese Font”. 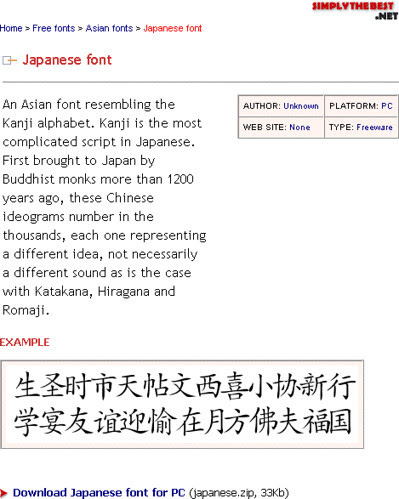 Notice the inconsistency of whether it is “Japanese” or “Asian” font between its title and first sentence in the description?

Anyone who has the very basic knowledge of Chinese or Japanese language would know there is no such thing as “Kanji alphabet”.

Plus, the font table is nothing but a bunch of random simplified Chinese characters. Not to be confused with the "example" shown above, font table looks like this.

Even though this is not the same font used in Marquis Daniels or that Finnish racist’s tattoo, it may explain why and how incorrect tattoos are generated with.

I just finished my interview with Cindy Chang of New York Times last night. I thought it went pretty well.

We discussed about the phenomenon of tattoos/body modifications and how Western companies trying to break into the Chinese market with mistranslated slogans. My friend Jeremy Goldkorn’s Danwei.org and Andy Chuang’s Goodcharacters.com both have a few examples.

Cindy would also like to hear more from Hanzi Smatter’s readers’ perspective. If you would like to voice your opinion, please let me know via email , and I will forward Cindy your contact information.

Soon after my interview, I got this email this morning from Valen Farcas.

Farcas is “bothered” by the fact that many of my entries are too sarcastic and I should “think a little self-restrain would do a great deal instead of a minute and a half of laughter.”

He/she is also unhappy about my “obsession with trying to make YOUR native language so exotic and exciting by denying people of its uses with the explanation that it has nothing to do with their culture and nature, so what?”

I truly enjoy and welcome comments like this since I believe strongly in “check-and-balance”. But if Farcas really want to call me an “elitist”, why bother with sugarcoating it with “your [awesome] blog”?

Jimmy Tsai of Venom Sportswear emailed me about Dallas Mavericks’ player Marquis Daniels in the latest issue of DIME magazine. 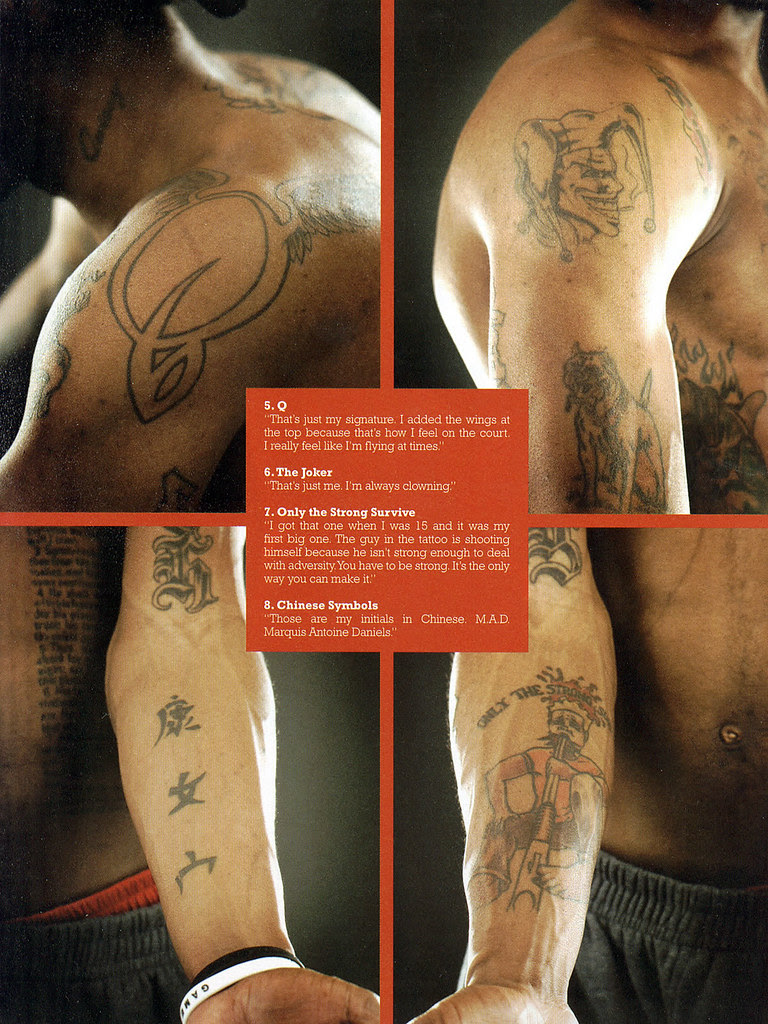 According to Daniels, the three “Chinese symbols” on his arm are his initials “MAD, Marquis Antoine Daniels” in Chinese.

Although the first two characters 康 and 女 are recognizable, the last character is only a partial that represents “roof”. Even if the characters were phonetically transliterated, they are still way off from “MAD”.

What does his tattoo really mean?

This tattoo was shown in March 7th of BMEzine’s kanji gallery without any caption.

The first character 革 (leather, skin) and last character 身 (body) are done correctly. I am having trouble on deciding if the owner wanted 亳 (capitol of Anhui province) or 毫 (hair, milli-) in the center.

As of right now, I think it should be 革毫身, which means “skin, hair, body”.

In a previous post, owner of a 亳 claims she was told it meant “carpe diem”, which is wrong.

I have been a little busy lately.

One of my short films called “Brokeback Heat”, actually it was just a parody thing I put together in two hours with Sony Vegas, was mentioned in March 2nd issue of New York Times (24 KB pdf file). Before that, I got interviewed by Larry Carroll of MTV about the short film as well.

I have also done several Hanzi Smatter related interviews with Joe Ventura of Hiragana Times, Christine Ziemba of Los Angeles Times, Janet Tzou of Inked Magazine and I am scheduled to do an interview next week with Cindy Chang of New York Times.

Over the week, I got three comic strips sent to me that are both entertaining and somewhat related to Hanzi Smatter.

Travis in Hiroshima sent me to the extremely funny David Malki's called “Wondermark”.

In an email, David told me that he was “considering offering a T-shirt joking about how ‘strength’ or ‘peace’ kanji on merchandise probably mean something like ‘dumb whitey’ or ‘balls’.” Perhaps David should submit his idea to Jlist.com. By the way, the character on the guy’s chest is 京, it’s frequently used in both Chinese and Japanese city names.

Aron emailed me Guy & Rodd’s “Brevity”, where Confucius is upset about noisy neighbors.

Aron has this to say: “[Brevity] it's not usually very funny, but the characters in the first panel caught my eye. It seems like they read 大单 (with extra stroke) 阜 (radical version, backwards) 单 (extra stroke) 羊 (sheep). Something about a sheep?”

Indeed, it does look like something dealing with goats or sheep, just like my local fire chief.

The last one was sent to me by the Patrick Brousseau,

Wherein the womanizing protagonist meets a Chinese girl and then her parents. Her parents are mystical because they appear to speak entirely in Chinese Zodiac calendar terms.

The only caption this March 2nd photo had was “my beautiful tat” in BMEzine’s Kanji tattoo gallery.

I don’t know if that is a good idea for a young lady to advertise herself as “child offering god”, unless she is in the business of selling her eggs or being a surrogate mother. 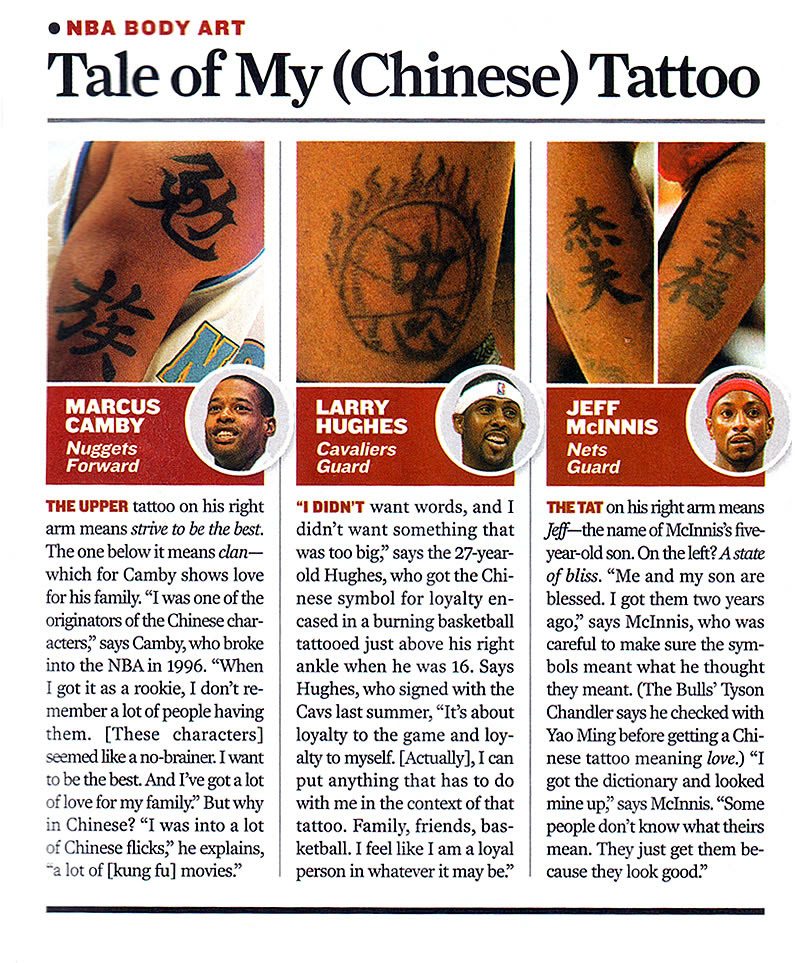 In the upcoming issue of Sports Illustrated, NBA players were interviewed about their Chinese tattoos.

When asked about why tattooing in Chinese, Marcus Camby replied: "I was into a lot of Chinese flicks, a lot of [kung fu] movies."

Jeff McInnis explains: "I got the dictionary and looked mine up. Some people don't know what theirs mean. They just get them because they look good."

What about Shawn Marion?

Update: An article in Chinese about NBA players' tattoos.