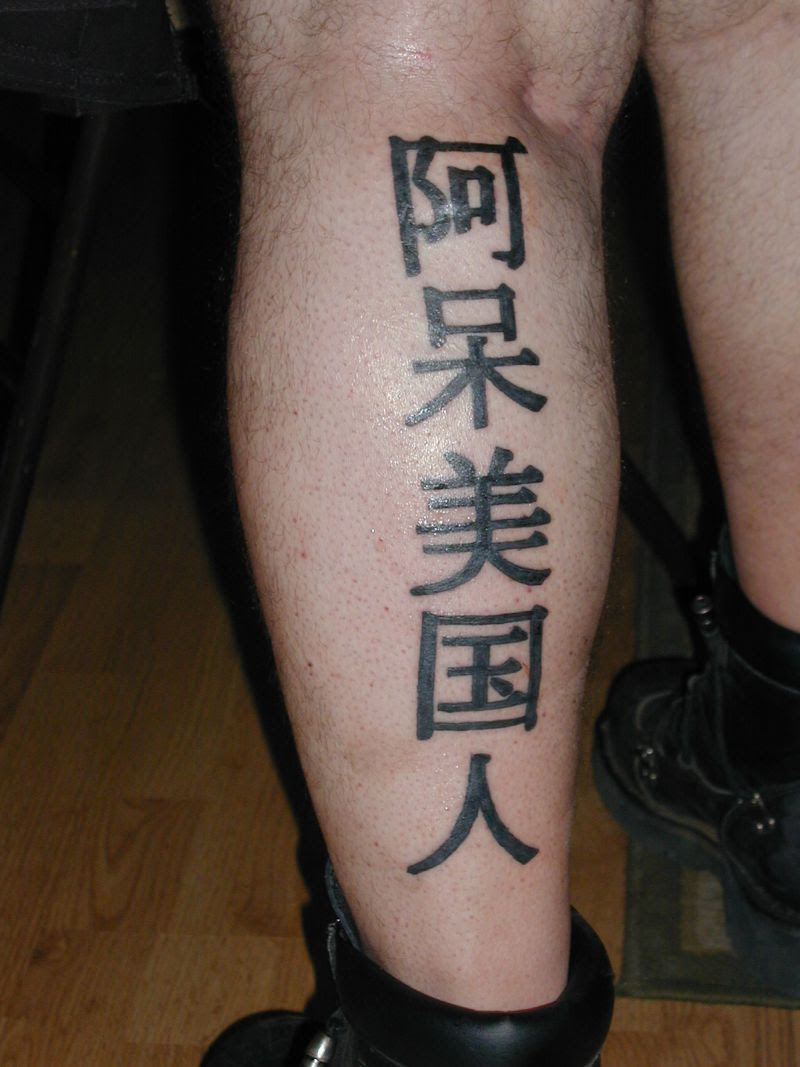 美国人 is Chinese for "American".

However 阿呆 (or あほ) is a localize dialect for "fool, jackass" in Japan's Kansai region. Where most Japanese would use 馬鹿 as "stupid". Also, 米囯人 is Japanese for "American".

Email ThisBlogThis!Share to TwitterShare to FacebookShare to Pinterest
In the latest issue of Wired magazine, there was a piece titled "10 Best Things We'll Say to Our Grandkids". 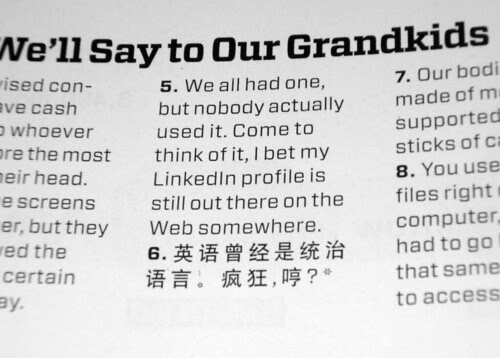 According to the magazine, English translation for #6 is:

"English used to be the dominant language. Crazy, huh?"

Dr. Mair and I both noticed the printed Chinese is not correct.

统治语言 (dominate language), is two English phrases spliced together with an odd sense of colonialism. 官方語言 (official language) or 國際語言 (international language) would be better fitting.

疯狂 does not have the same contextual meaning as "crazy", rather "frenzied, unbridled; insane". In this case, a better phrase would be "傻不傻", or "isn't that silly?"

Perhaps this is a nod to Firefly, where mixture of Chinese Mandarin phrases were added into the show's dialogue.

Perhaps you can post this for me on HANZISMATTER.

The attached picture, sent to me by Jonathan Smith, shows a basketball player's "Chinese" tattoos. They read 康女宀 from top to bottom: KANG1 ("peace, vigor") NÜ3 ("woman") MIAN2 ("shelter, thatch"). Yet the proud owner claims that they are "my initials in Chinese, M.A.D." 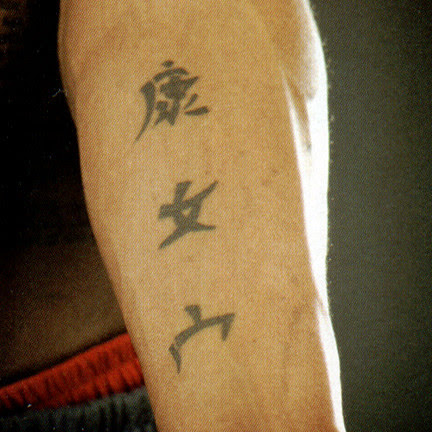 My best guess as to how this may have happened is that the basketball player approached a tattooist who was minimally literate (or illiterate) in Chinese or English (or both) and showed him / her his initials, requesting the tattooist to "write them in Chinese symbols / characters / ideographs / hieroglyphs / pictographs / whatever." The initials may have been more or less ornately written, with the result that the tattooist came up with these three HANZI as his / her best representation of what he / she was seeing. For example, if you twist 女 around in different orientations, you can sort of see an "A" there. Ditto for the other two HANZI.