From Finland with Love

Jukka from Finland has emailed these two photos to me from a shop called Tattoo Heka.

The first one is a couple’s tattoo. They had tattoos that say 猴愛狗 (Monkey loves Dog) and vice versa. Assuming Dog and Monkey are their zodiac signs respectively.

Unfortunately nobody in the shop, including the clients and the tattooist, has realized that the character for “love” 愛 has been placed upside down.

I have seen the exact same Asian gibberish font used in tattoos twice before, and one of them was in Finland. But, it was too late for this Finnish young man.

One is called “Evil Angel” and the other is titled “Burning Rain”.

http://www.bmezine.com/tattoo/A60626/high/bmepb293004.jpg
Somehow the first character 邪 of 邪惡天使 has been separated into two characters, which are 牙 (tooth) and 阝 (a partial that means looks like an “ear”).

For those who are curious about the striations below the hands in the photo, those are stretch marks. I am not sure if the photos linked above were from a female tattooer or a very large man with gynecomastia.

Te Koop - I Evol You

Jonathan from Toronto has sent in this photo of Te Koop's window. 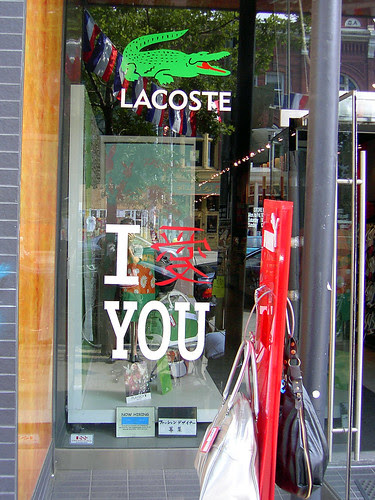 The red character 愛 is reversed.

Ironic part of this: Te Koop (Dutch phrase means "For Sale"), located on Queen street just east of Spadina, is less than a block away from Toronto's Chinatown.

For those of you think the sign would be correct when viewed from inside of the store.

My Friend Joe
Secong Victim (top tattoo only)
(by ViciousVen)

First of all, I think ViciousVen really meant to say was “second victim” instead of “secong”.

Secondly, why are the orientations of these two characters 猛 and 俐 rotated?

Reader Lester B. has sent me this photo of a teapot from Germany. 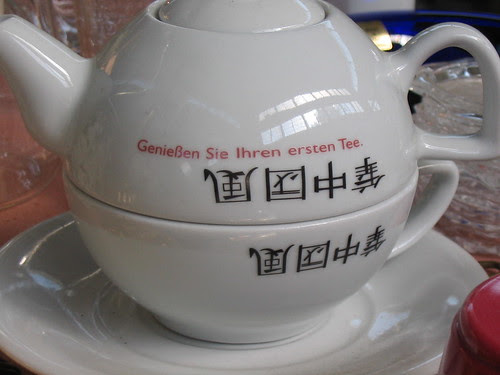 The red text in German says "enjoy your first tea", yet the four "Chinese-looking" or "Asian-inspired" characters are complete gibberish, even when they are read upside down.

A tattooist named Svetlyo of Eclipse Tattoo in Ruse, Bulgaria, did these two tattoos.

In both cases, the characters circled in red, 運, 權 and 惑, are missing strokes. I wonder if they were done incorrectly due to tattoo template flaws or a neglectful tattooist.

At recently 2006 Harvard Class day, the creator of Family Guy and American Dad, Seth MacFarlane, had some simple tips for the new graduates:

Number 1, Don’t get a tattoo of a Chinese character on your fanny if you don’t understand the language. Tattoo removal services are making a killing off people’s stupidity. It’s because little “Miss. Individuality” walks into a tattoo parlor and gets an Asian symbol she thinks it means “spiritual woman”, but then she later finds out it means “sugar substitute”.

Videos of Seth MacFarlane's speech in full length can be found on DevilDucky, Google Video and YouTube. Thanks to Jon Rahoi and Gaijin Biker for the tips.

Since most tattooists in the West are not fluent in Chinese, one would think getting Chinese character tattoo done in Hong Kong would minimize the probability of screwing up.

That logic would be true only if the tattooist has passed primary education level.

It seems at least one tattooist (Gabe of Ace Dragon Tattoo) in Hong Kong can’t be trusted with Chinese character tattoos.

因果 and 報應 are redundant phrases for “karma”. In the tattoo, left partial of 報 has two extra dots added to 幸, and 應 is missing one or two 亻depending on the font style.

In the karmic fashion, Erika H. has sent in an Engrish tattoo from Japan.

Update: June 18, 2006 - The owner of the "karma" tattoo, Jessica Lelovic, is upset about seeing her tattoo been commented on this site. She also claims that the two extra dots are added due to the font style (yea, right) and I have violated copyrights of these photos.

Since I have never claimed ownerships of these photos, plus all the photos are linked to their original sources, Lelovic's claim is so pathetic that it would not hold up in any court.

EFF, Electronic Frontier Foundation, has this to say:

So, I would like to make the following clear to Jessica:

1. Don't be stupid and get an incorrect tattoo.
2. Don't post photos of your stupid tattoo on the web to show off, especially third party sites (i.e. MySpace, Friendster, or BMEzine). Depending on these sites' terms and conditions, you may have already waived all your copyrights away once the photos are posted.
3. Don't be a bitch when someone else is mocking your stupid tattoo. Keep a low profile. The bitchier you get, more entertaining it is for everyone else.