"celebrate the knowledge of a dangerous, crazy father"

Reader Kat has emailed me yesterday this photo of her husband's back: 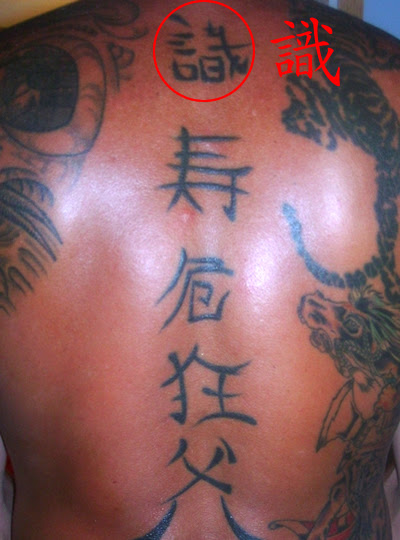 He got it done four years ago and the characters should be Knowledge, Loyalty, Courage, Warrior, & Father.

Since Alan just got back from Japan, I forwarded this to him. Here is what Alan concludes:

Besides the terrible calligraphy, the character 識 is missing a dot at the upper right-hand corner. Also, the stroke at the bottom center of 寿 is supposed to be a separate dot rather than the incorrect connected stroke pointing down and to the right that we see.

Is this supposed to mean "celebrate the knowledge of a dangerous, crazy father" or something?

I don't get the whole picture but it doesn't sound very complementary to the "father." The characters do not seem to mean anything like they think they do.
Posted by tian at 8:31 PM 6 comments: 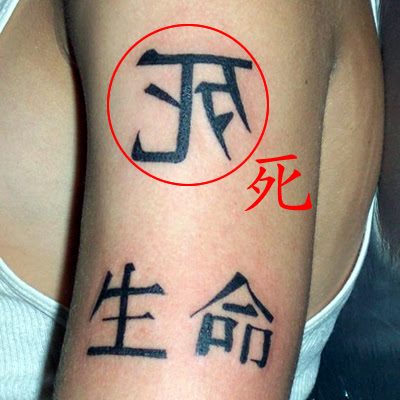 Another gem from Rankmytattoos.com, it is a mirrored 死 (death).
Posted by tian at 8:23 PM 5 comments:

HS reader Anna sent this photo to our attention:

Its owner, LuvBug, said she got this exact tattoo along with two other friends and it meant "emotional and spiritual strength. "

Besides the obvious botchery of two characters, the phrase is not 100% grammatically correct.

In my opinion, the proper version should be 精神的力量 or 精神力量. However, Alan is much lenient & thinks 精神的力 is good enough.

The seven virtue of Bushido are so poorly done, many have left with missing strokes.

The character for rectitude 義 has been spited into two, 王 & 我. Instead of representing righteousness, it is "king me" which sounds more like a term from Chess. Or "The King and I", if he is a musical type.

Any self-respecting samurai would have committed suicide long time ago to defend his reputation and honor.

This photo's caption says "My girl's 'Bitch' tattoo. So fitting"

Why would anyone want that to be displayed on their body?

Even so, she should at least tattoo a price list underneath. It is so hard (no pun intended) to haggle, when all the blood has left the brain and gone into the boner.
Posted by tian at 8:12 AM 8 comments: