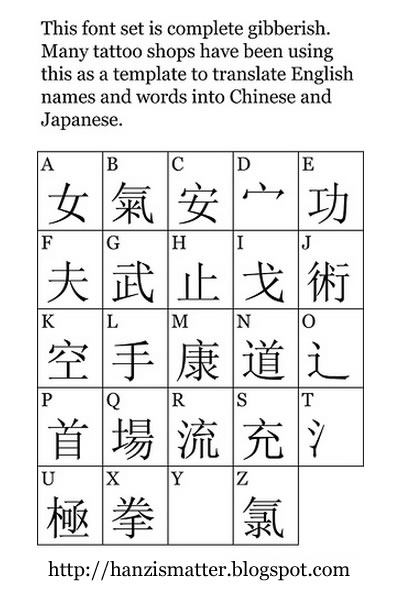 This photo was submitted to BMEzine.com's gallery in August 28th accompanied with the following caption:

"lettering that was suppose to say Jason"

(by Doc, A & B Productions, Brown City, Michigan)

Another sucker of the downloadable gibberish “Asian font”.

Reader Robert found this photo posted in one of Lostcherry.com’s pages and would like to know what the phrase meant.

The top character 太 means “very, too, much; big; extreme”, and the bottom one 屁 means “break wind; fart; buttocks”.

Update: August 27, 2006 - According to the original website, the tattoo is supposed to be "fat ass".

If that is true, the top character should be 大, not 太.

I saw this shirt in Guess' store window today.

When I asked the sales lady what the Japanese on the shirt meant, she replied "that is CHINESE" but still did not know what they meant.

I saw this photo in someone's MySpace page. He has since then closed his MySpace account, but the photo is still available at photopile.com.

I assume the last character is 幸, which means "fortunate" or "lucky".

Notice his username "Lord Chino"? I am unsure about if he is referring to

In August 7th issue of Maclean’s magazine (Canada’s leading weekly magazine), there was an article titled Botched in Translation about Hanzi Smatter by Nancy MacDonald.

Besides the rectangular tidbit at lower right corner of the page about “Polish grannies making skimpy, see-through women’s thong using traditional crochet patterns”, I thought the parts about tattooist 6ix Acheson (yes, that is his name “6ix” with a number in it) and Dr. Gerald Boey were very good:

“[6ix] Acheson thinks accuracy is a responsibility shared equally by client and artist. ‘Even if the client comes in carrying a drawing, they shouldn’t just blast it on.’”

“‘Unfortunately, it’s a buyer-beware market,’ cautions Dr. Gerald Boey of Vancouver’s Arbutus Laser Centre, a specialist in laser removal, noting that about 20 percent of those with tattoos are considering removal.”

I was talking to a friend of mine Marc about a new Asian-themed restaurant just opened in northern Scottsdale called Ten Asian Bistro. A quick browse through their website, I have spotted something that is not quite right. Under each item in the rollover menu, it has a corresponding character.

For someone that is not familiar with Chinese or Japanese, one might think the characters are actual translations of “home”, “menu”, “general info”, and so on.

These are random characters that are there to give the website an “Asian” feel. Especially when 澄 is used for both “home”, “décor”, 欽 for “general info” and “reservations”.

“Ippei general manager Justin Cohen would not allow any photos of his restaurant's food. His lack of confidence is telling… Ippei aims to be destination dining, but it is not there yet. As of now, I'd rather do the five or six hours via car to L.A. But if you're in Ippei's vicinity, you could do worse. After all, both McGrath's Fish House and the White Chocolate Grill share the same complex.”

I was about to post this, then I got an email from Igor with this photo of a Japanese restaurant he visited.

http://flickr.com/photos/ushkarev/197491685/
What are those characters in the left plaque? It could be due to poor lighting, but doesn’t the chef appears to be more Hispanic than Japanese?

P.s. Do not even get me started on the establishment known as P. F. Chang’s.

Miara tipped me about during one of Carlos Mencia's monologues in season one of Mind of Mencia, Carlos has talked about people getting tattoos.

“…Let me get this straight, you got a tattoo in jail from a guy that has failed English and Spanish, but now he knows Chinese, is that what you telling me?

You have 26 letters in English and Spanish kicked his ass, but 1,300 characters in the Chinese language…

Are you retarded?! I can’t wait till this guy ends up in Chinatown and some Chinese guy goes: ‘oh, that is a beautiful tattoo, so you love to suck *bleep*…”

Having a tattooist who can't even spell words in English correctly to do your tattoo in another language would be a problem... It does sound like that person I recently got those angry comments from...