This is a freshly done arm band tattoo shown in BMEzine’s gallery (July 31, 2006) by James “Devilboy” Robinson of F.I.S.T. Ink in North Carolina (not the James Robinson of Nine in Brighton, UK). The six-character set supposedly to be “Duty Honor Courage”.

The first two characters 迪蒂 are not even close to “duty”, unless the client is a dedicated gardener.

迪 means “enlighten, advance; progress” and 蒂 is “peduncle or stem of plants”.

Perhaps, they were some kind of “wicked” phonetic translation from English to Chinese or Japanese? But, why?

荣誉 do mean “honor”, except 誉 is missing a stroke.

The last two 勇气 are “courage” or “bravery” and they are correct.

A quick browse of James “Devilboy” Robinson’s MySpace page (not the James Robinson of Nine in Brighton, UK), from metal fabrication to graphix (his spelling) design, it seems he is a very talented person. Although, no where it was mentioned on his page if he has ever studied Chinese or Japanese.

Oh right, tattooists are “artists”, and they are not linguists.


Update: August 1, 2006 - James Robinson (not the James Robinson of Nine in Brighton, UK) has sent me the following angry comment and instant messages:


Update: Aug. 2, 2006 – I have forwarded my experience with James Robinson (not the James Robinson of Nine in Brighton, UK) to my good friends Shannon Larratt and Marisa DiMattia, hoping not all tattooists are like him and it was an isolated incident.

Shannon Larratt is the man behind the largest body modification website in the world called Body Modification Ezine (www.bmezine.com), where some of James Robinson’s (not the James Robinson of Nine in Brighton, UK) pieces were originally posted.

Shannon, Marisa, and I regularly exchange tips and emails regarding the tattoo trend. Some of our postings have cross-linked in each other’s websites.

“That email is hilarious. But it's a pretty typical response. Tattoo artists can be a little like Klingons. :) PS. Marisa will love that you forwarded this to her too -- I was just about to when I saw you had included her. She just had a very similar run-in...”

Marisa replied to me with:

“It's true that tattoo artists should not be responsible for characters that are not native to them. That said, if he really cared about reputation, he would not have Chinese flash representing his work. I don't want to see what the rest of his portfolio looks like.”

Marisa DiMattia is a New York attorney by occupation. In her spare time, she manages Needled.com and writes a legal column for BMEzine.com. Recently, Marisa had a run-in with Joseph Smith of Big Brains Productions in Omaha, Nebraska, after she confronted him about theft of work done by someone else.

Referring to James Robinson (not the James Robinson of Nine in Brighton, UK) as a “tattoo artist” is giving a bad name to all other respectable tattooists in the profession. In my opinion (after his email and instant messages), he is nothing but a man who can hold up a mechanical needle, dipping in ink, and trace color lines on gullible clients’ skin. That is no different from developmentally challenged students to trace color lines in special education classes.

My friend Mark Swofford has informed me about a new movie called Fearless starring Jet Li, which is loosely based on the life of Huo Yuanjia.

These are two screen shots Mark has captured from the movie's trailer to show just how ridiculous they are:

Just below COMING SOON is a giant ㄍ. Along the right side of the screen is the following, in zhuyin fuhao: ㄇㄞㄒㄖㄘ. This, in Hanyu Pinyin, would be “maixrici,” which is complete gibberish. The other vertical lines of text are also nonsense in zhuyin fuhao. Again, there’s nothing wrong with how these are written. It’s just that they’re no more meaningful than a random string of letters. (more)

The zhuyin fuhao on the left read, from top to bottom, ㄔㄐㄎㄊㄆ, which would be “chjktp” in Hanyu Pinyin. As I think should be obvious even to those who don’t know Mandarin or any other Sinitic language, this is simply nonsense. (more)

Hopefully the actual movie would be better than the trailer, unlike the last movie I saw Lady in the Water by M. Night Shyamalan which really sucked scrunt's balls.

From Shannon Larratt's BMEzine.com gallery, here is a July 27th posting from Bulgaria:

Two of my earlier postings (one & two) have already talked about some people would download this so called "Asian Font" from the internet and tattoo themselves with gibberish.

If you have not seen Clerks II, Shannon Larratt had a brief role in the movie. He was the "Ear Guy" in Mooby's.

Helen of eLearners.com sent in this photo from Zao Tattoo in Macomb, IL.

名言 means "wise words" or "famous saying" and 最初 is "beginning" or "initial".

Obviously this person has never heard of the wise words from Dr. Gregory House, Seth MacFarlane, Red vs. Blue, Fox News (it is a bit strange to see "Fox News" associated with "wise words"), and Bill Maher. 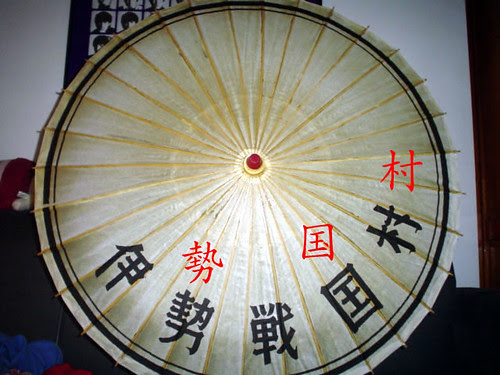 Hanzi Smatter was mentioned in the latest episode of HanselMinutes with Scott Hanselman and Carl Franklin. For those who do not have the patience to sit through over twenty minutes of geek talk, the clip starts at time mark 26:30.

I use Macromedia Fireworks (now Adobe Fireworks) for most of the graphics work, and Sony Vegas 6.0 for audio and video editing work.

The character in Computer Zen's logo is 善, typically "zen" is referring to 禅.

Andy from Texas Tech sent in this screen capture from episode 19 of Fox’s drama series, House (or is it “House M.D.”?).

Dr. Roger Spain (First Applicant): Wow, I thought you'd be the last person to have a problem with nonconformity.

Dr. Gregory House: Nonconformity; right... I can't remember the last time saw a twenty something kid with a tattoo of an Asian letter on his wrist. You are one wicked free thinker! You want to be a rebel; stop being cool. Wear a pocket protector like he does, and get a hair cut. Like the Asian kids that don't leave the library for a twenty hours stretch. They're the ones that don't care what you think.

Many places including tattoo shops advertise 和 as "harmony, peace; peaceful, calm". In modern day Chinese, it only means is frequently used to represent "with" or "and".

From June 29th's postings in BMEzine's gallery, this young man from Lithuania got what supposed to say "Love Loyalty Truth" tattooed on him by a tattooist known as "Blackwo".

The middle character looked like a botched 竜 or 帝, which is nowhere near "loyalty".

This young man should have read the March of 2005 issue of FHM Lithuania edition.

Yusuki Toyoda and I are both scratching our heads about the meaning of Kim Maher's tattoo posted in Sports Illustrated's website.

As far as I know Kim Maher is not in any way related to Bill Maher, who has commented about the trend of Chinese character tattoos. Her tattoo of 康女止功流 is loosely translated as "healthy woman stops achievement flow".

Magazeta in Livejournal.com is a community site about China and Chinese culture written in Russian. Its owner named Ma Yuxi emailed me this photo today:

I have no idea what the second character is supposed to be.

While I was walking through Seaport Village in San Diego last weekend, I saw many places that were advertising these "henna tattoo" or "henna painting" along the beach. 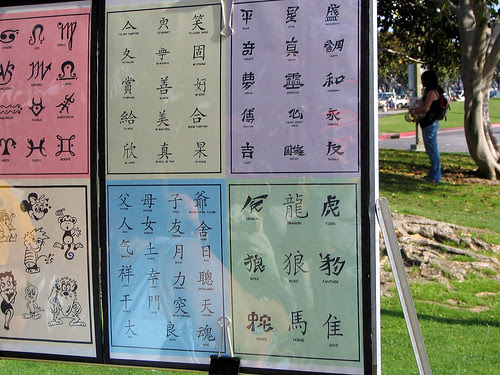 I laughed at their Chinese characters sections because most of them is either incorrectly written or the translations are way off.

I was tempted to inform one of the shop owners about the mistakes, but I was amazed by the gibberish character henna’s popularity, she was too busy to satisfy customers' $5-per-piece consuming needs. 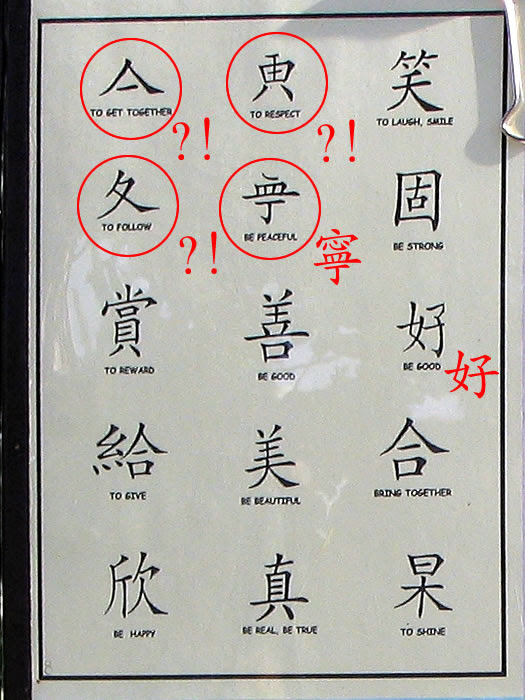 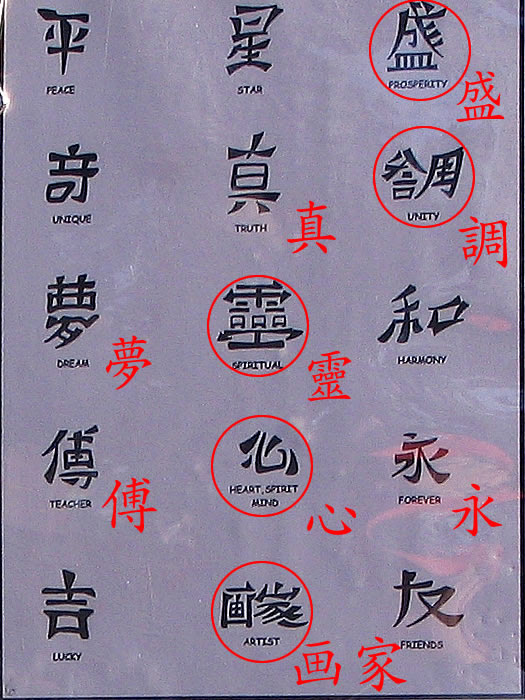 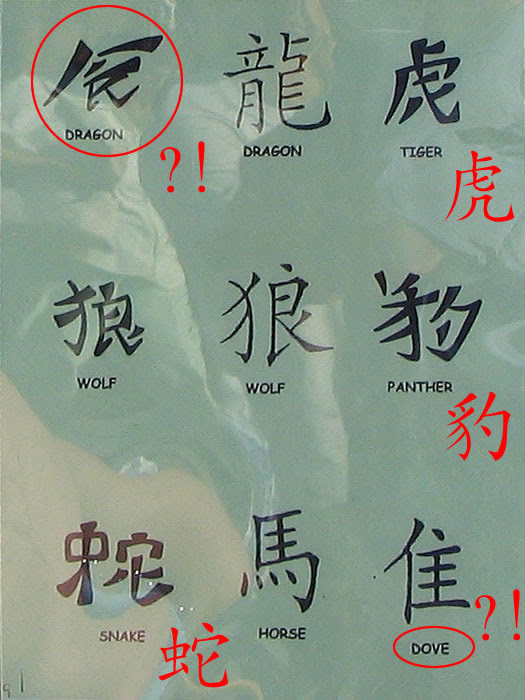 None the less, there were many young ladies with gibberish painted on their bodies.

The good news is that they will look like fools for only a week or so, and then the henna paint would wash off.