From BME's gallery, 雪 has one extra horizontal stroke under the radical, 雨. 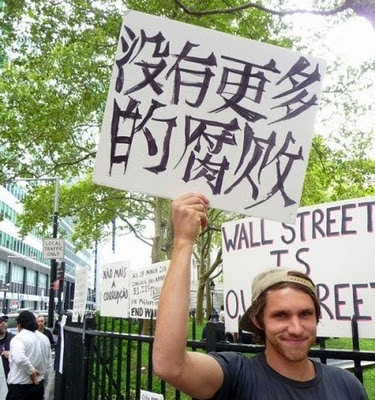 Dr. Victor Mair at Language Log has a nice piece on how Google Translate became the de facto tool for anyone wants to communicate in a foreign language.  Even though in some cases, translation it provided are incorrect.

This young man holding the sign at "Occupy Wall Street", probably wanted "No More Corruption".  However, Google Translate gave him "There isn't any more corruption."

By the way, why is he holding a sign written in Chinese?!
Has this naive young man ever done business in China?
How about 關係, 後門, and 紅包?
Posted by tian at 9:19 PM 7 comments:

This is a sign for a Chinese restaurant in Dallas-Fort Worth Airport. The characters are upside down and seem to say "blue bamboo". 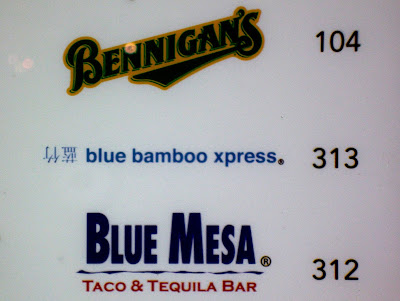 蓝竹 does mean "blue bamboo" and it is displayed upside down.

According to Yelp, its food is terrible and only has one star.

Hello and thank you for your awesome blog!

We recently visited the "Phantasialand" amusement park close to Cologne in Germany.

This is what the trash cans in the "Chinatown" section look like. It says "garbage" in German, and while I instantly recognized the second character as being upside down (have been studying Japanese for a while now), I'm not sure whether the first one is a correct character at all or if there is any meaning to this combination.

There were loads of upside down or gibberish characters in the "Chinese" ghost train ride, too ^^; 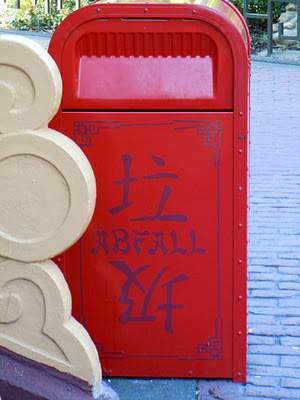 Not only the second character 圾 is upside down, the first character 垃 is missing a stroke.
Posted by tian at 8:10 AM No comments: