any chance you could translate what my sister just got tattooed on her neck?

It's supposed to be something in the lines of "as long as I breathe, I hope" 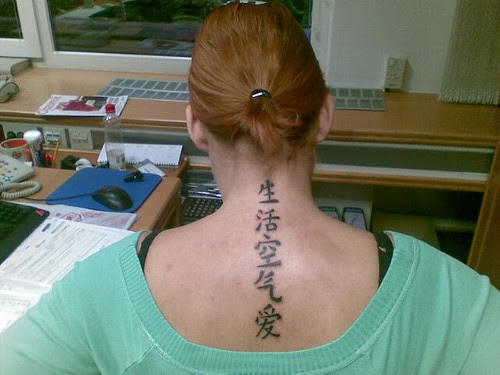 The five characters do not have same poetic meaning as she hoped. Rather, they are "living", "air", & "love".


Cracked.com recently had an article titled "5 Examples of Americans Thinking Foreign People Are Magic", and its intro to #2 was:

You know how it's been trendy for a while for white Americans to get Chinese or Japanese characters -- sorry, "Hanzi" or "Kanji" -- as tattoos? The idea seems to be that if you get the English words "STRONG" or "BEAUTIFUL" tattooed on your arm, you look like a bragging retard, but if you get it in Japanese, it is suddenly meaningful.
Posted by tian at 10:01 AM