Another winner from Checkoutmyink.com with caption stating the three characters are his girlfriend's initials.

Apparently this man did not receive the memo about there is no such thing as "Chinese initials for English names". 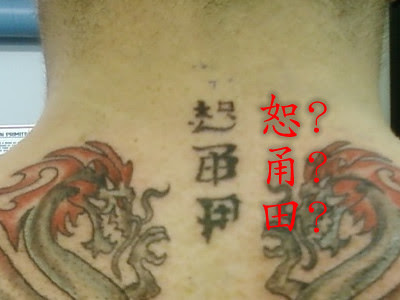 Beyond that, we have no clue what exactly the initials are supposedly to be.

Update: Reader Becki and others have noticed the initials may be "LBP" (somehow it reminds me of O. P. P. aka. Other People's Pussy by Naughty By Nature) written in a font that mimics pseudo-Chinese, i.e. The Choy Suey Font.

By the way, chop suey is not an authentic Chinese dish, rather according to legend it is from table scraps.