Hey guys, my name's Mari. I've always been a fan of the blog, and I was wondering if you could verify my tattoo's meaning.

I'm a foreign language major, and I've studied both Mandarin and Japanese in the past. I decided to translate the meaning of "strong willed woman" into 英気女 (eiki onna). So... is this correct? I sure hope so! 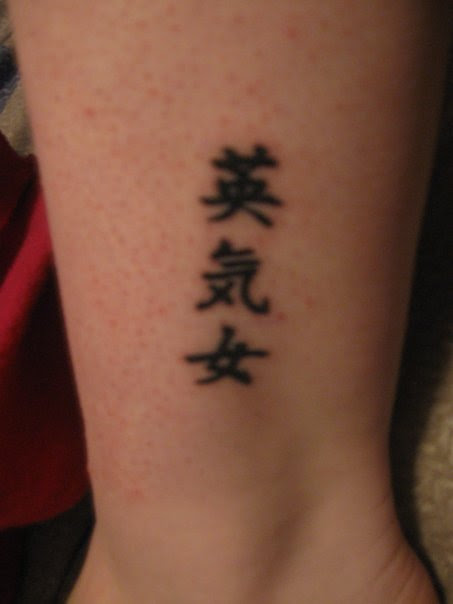 At the very least the characters are written correctly as if it was supposed to be Japanese.

Unfortunately, 英気女 does not mean "strong-willed woman" in Japanese.

It is more like "brilliant woman" or "woman of excellent ability" if they were to translate it literally. But even this is not a proper translation because 英気女 is not grammatically correct in Japanese.

It lacks the proper grammatical bits and such, so it sounds very brusque and looks sort of "faux Chinese" to a Japanese person. To be proper, they would need to be written 英気に富んだ女性 [eiki ni tonda josei] if "brilliant woman" was intended.

But it cannot be proper Chinese because the simplified character form 気 is used only in Japanese. In Chinese, only the character forms 氣 (traditional) or 气 (simplified) are used.

Another problem is that it seems quite inappropriately boastful and prideful for someone to tattoo themselves with "brilliant woman" in a Japanese context. One would only say this sort of thing about someone else, or as a goal to strive for, and not as a label on your own body. The most common usage of 英気 in Japanese is in the phrase 英気を養う [eiki wo yashinau] which means roughly to "rest up to be able to demonstrate one's full ability."

Certainly there are other, much better, ways of saying "strong-willed woman" in Japanese. One might be 意志の強い女性 [ishi no tsuyoi josei].