Seriously, I cannot think of anything worse. 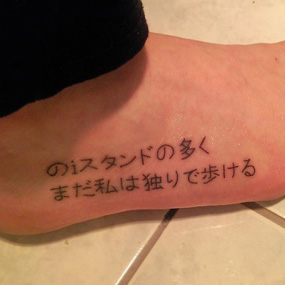 According to Reddit discussion thread, the tattoo was intended to be:

"I stand for many yet walk alone."

However, it is a pretty horrendous translation fail.

The peculiar thing is that the characters are all correctly and properly written in a nice font, but it is completely gibberish in meaning. Could it possibly have been machine-translated into Japanese from English or some other language and the MT output tattooed as-is onto the unsuspecting tattooee’s foot? You would think that maybe the untranslated lowercase letter “i” in the supposedly Japanese MT output would have clued someone in to the fact that the MT had failed, leaving just gibberish.

The first line makes no sense but might mean something along the lines of:

The second line is not so bad, translating to :

“I can still walk alone.”

This reminds me of Green Day's Boulevard of Broken Dreams.