Peter has forward me this interesting story about a woman's tattoo experience.

"I have four Japanese symbols across my back, gleaned from a Japanese-English dictionary.

Yes, it would seem that in our haste, nobody took the semicolon from the dictionary entry out of the design and it now lives for eternity on my skin." 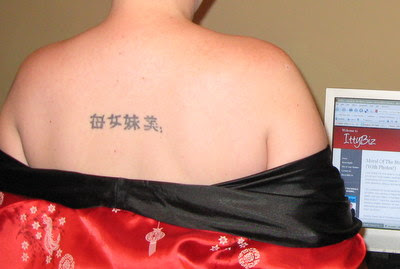 Peter and I are shaking our heads regarding:

She is apparently more upset that there's a semicolon attached to her tattoo than by the fact that the tattoo itself is terribly done.